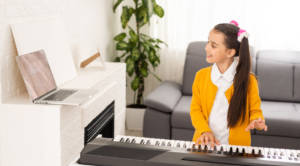 Take 1 one 1 lessons from great teachers in our studios or online.
We have 8 lesson studios inside the shop. Piano studios are equipped with well maintained 2 YAMAHA an 1 KAWAI upright pianos not electric keyboards.  Our experienced teachers teach students from 5 old beginners to adult students. Call us for a trial lesson today.*Teachers are individuals who rent our studios or independent contractors. They will manage their own schedules, have their own curriculums, and use own methods. Trial lessons are full lessons without signing contract and should be paid in advance to schedule one.

Chris Hahn is a violinist/violist who has attended the New England Conservatory of Music, and studied with both Martha Katts, and Carol Rodland. He spent his years in High School attending the Kennedy Center Fellowship program under the instruction of Daniel Foster, principal violist of the NSO.

As a teacher, He likes to approach in a technical manner first, then along with the musical aspect. Understanding and appreciating the instrument comes to be of more ease when the mechanics of handling is introduced. He has had experience in teaching students anywhere from 7 years old to 40 years old.

Ryan Ashley Nobles currently resides in Reston,VA. She graduated with a Master’s in Music in Cello Performance from George Mason University in 2012 and a Bachelor’s degree in Music Performance from the University of Mary Washington in 2006. Ms. Nobles has received music scholarships for both degrees, served as principal cellist of the GMU Symphony orchestra in 2012, was principal cellist of the University of Mary Washington College-Community Orchestra 2003-2006, and was selected to perform in George Mason School of Music 2011 Honors Recital. Ms. Nobles performed with the University of Mary Washington College-Community Orchestra as a high school student for their Carnegie Hall performance in 2002 and has worked with the Canadian Brass, Judy Collins, Marvin Hamlisch, O.A.R., Michael W. Smith, Lexi Walker, GENTRI, Steven Curtis Chapman, and Larry Graham.

Teaching at Centreville Music Shop since 2007

Caitlin Schneiderman is a folk guitarist and singer songwriter from Clifton, Virginia. Together she and her six-string have serenaded New York City’s streets, delighted North Carolina’s Smokey Mountains, and traveled down the California cliff sides. She made her first recording at age fifteen and has continued to record and perform her original music since then, something she encourages her students to do as well. After completing college at Shepherd University, Caitlin began teaching private guitar, ukulele and songwriting lessons. She has been teaching in Northern Virginia for the past 15 years. If you’re a beginner looking for somewhere to start, a intermediate player needing help with your song arrangements, or a songwriter wishing to create guitar accompaniment, Caitlin can show you how to highlight your own natural talents. Caitlin offers both in person and virtual lessons.

I am a Baltimore area trumpeter, from Augusta, GA originally, and I came to the DMV in2009 via USMC fleet bands. I’ve taught music in the DMV since 2011. I freelance, compose, tour, do recording sessions, and have worked for local, national, and international artists. When I’m not doing these things, I endeavor to practice/listen often and count it a joy to be in worship and church fellowship.(Gig w/ Norman Brown! L to R: Norman Brown, Craig Alston, Me) Capital Jazz Cruise Jan 2020

GINA CHOE * (violincello) has been a member of the Washington Chamber Orchestra since 2014 and has also performed locally with the Fairfax Symphony Orchestra and the Apollo Orchestra. She has also been a cello instructor at the British International School of Washington, DC. Most recently, she served as a professor of the 2019 Panama CelloFest, in collaboration with the National University of Panama (Panama City, Panama). Ms. Choe obtained her Master of Music degree in cello performance from Indiana University (Bloomington, IN) after receiving her bachelor’s degree on full scholarship from James Madison University. She also finished a non-degree performance program at Southern Methodist University and pursued the Doctor of Musical Arts in cello performance as a full tuition-waiver scholarship recipient at the University of Illinois Urbana-Champaign under the supervision of Dmitry Kouzov. Her other mentors include Tsuyoshi Tsutsumi (Indiana University-Bloomington), Andres Diaz (Southern Methodist University), Carl Donakowski (James Madison University), Sharon Robinson, Emilio Colon, Eric Kim, and Glen Garlick. She has also participated in master classes of Janos Starker, Mischa Maisky, Tim Eddie, Gary Hoffman, Zuill Bailey, Aldo Parisot and Helga Winolds. Ms. Choe grew up in both South Korea and the US in Northern Virginia. As a young musician, she performed in the All Virginia State Orchestra and was a youth fellow associate of the National Symphony Orchestra, among many other special recognitions. She is particularly known in this area for her love of serving the community and has performed in many voluntary settings such as retirement communities and local churches.

James Helle is an accomplished musician and guitarist with a wealth of knowledge that would benefit all ages and skill levels.

James Helle is a Northern Virginia based guitarist with over 20 years of professional performance and teaching experience. He studied with Berklee graduate and
Nighthawks guitarist Paul Bell for 3 years and continued his studies with members of The Shenandoah University Jazz Ensemble. James has multiple east coast tours under his belt along with four recorded albums under The Band Called Future. James has also formed a group by the name of Projected Man, who’s debut album was produced by multiple Grammy winner Michael League of the band Snarky Puppy. James currently performs with his trio Cockpit, does solo performances and also performs with The Brennan Bros. and with The Junior Bryce Band.

Teaching at Centreville Music since 2016.

Teaching at Centreville Music since 2007.

BM in Piano Performance at GMU
Member of MTNA, VMTA.
Over 20 + years of teaching experience in DMV area from age of 5 to adults.
Church pianist/accompaniment for over 15+ years.

Hannah Park is an accomplished and talented musician who has been involved with music since 1991. An instructor in the Northern Virginia area since 1999, she has experience with various performances and recitals both through her students and personal performances. Hannah attended Chapman University in California and received her degree in Piano Performance. Ms. Park’s experience and enthusiasm for music is contagious, and transfers gracefully into her lessons, benefiting all of her students.

Biography: Matthew Gattuso has been playing the viola for fifteen years and has performed with groups such as the Piedmont Symphony Orchestra, Manassas Symphony Orchestra, William and Mary Symphony Orchestra, and George Mason Symphony. He received his Bachelor of Arts from The College of William and Mary, with a concentration in composition and piano performance, while acting principal viola of the college symphony. In addition Mr. Gattuso was very active in chamber music, performing in quartets, quintets, and chamber ensembles for weddings, receptions, and candlelight concerts.
Mr. Gattuso began teaching strings privately in the Fall of 2012 and was a founding member of the Crossroads Youth Orchestra in Culpeper, VA as well as acting assistant conductor for the inaugural season. In December of 2015 he completed his Masters in Strings Pedagogy from George Mason University.
Mr. Gattuso strongly believes in the positive impact of music as a tool for developing concentration, problem solving, self confidence, and organizational skills. More importantly, though, he believes that music has the power to change people for the better and gives students the opportunity to explore who they are, who they want to be, and how to get there. In lessons, Mr. Gattuso will seek to build on the foundational core of playing technique while exploring new territory in line with the particular goals and needs of the student

Teaching at Centreville Music since 2008.